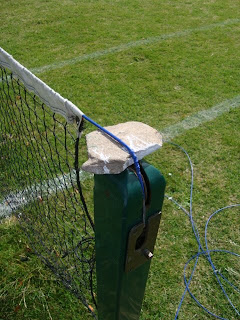 I don't know if anyone has tried to play tennis recently on Jesus Green. If they have, good luck to them.
You will be lucky to get on one of the two hardcourts, which are constantly occupied by foreign language students tapping the ball to each other. This is fine but you will never get tired doing this, so such games can last hours and students have not compunction to get off after half an hour if people are waiting.
The lines on these courts have not been painted this year and are therefore hugely worn out and barely visible. There is also no winder on the net so it has inevitably lost tension and sagged below the required level. This leads to people making rather pathetic efforts to raise the net just so they can have a game (either attach winders or supervise the courts and have someone raise the nets when required, if that is the approach).
Then there is the terrible state of the grass courts. These are the worst they have ever been. I played a few decent matches on those courts two years ago, but the persistent neglect by the council means they are now unplayable. The ball bounces unevenly and jags off the surface at unpredictable and strange angles. This is part of grass court tennis (as McEnroe tells us at Wimbledon) but for every bounce. The nets are also badly damaged and the fences vandalised, encouraging footballers to play on it.
This is because there is virtually no maintenance of the courts. They are mowed to an acceptable level, but there is no pre-season care (rolling or spiking, which is essential) which means the court can never be flat. Street Scene say this is because there is no roller (an excuse put forward for the proposed scrapping of the Hobbs cricket pitch), but really there is no will to get the courts up to a playable level. Offers for volunteers to take over the maintenance were ebuffed due to health and safety reasons.
Sadly it's time to scrap the grass courts. These were great fun for many years but are just too awful to play on anymore. It is a shame to lose the city's last grass courts but, in truth, we have already lost them because they are so bad.
Bring on the proposed £80K pair of hard courts so at least tennis fans can get have a chance of getting a game.
Posted by JGA Secretary at Sunday, July 26, 2009