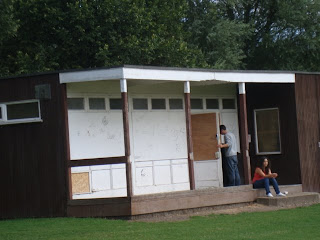 The wooden pavilion on Jesus Green is currently scheduled to be knocked down.
However, any scheme to improve the green would not occur for at least another two years, so it will remain derelict during this time and is likely to be vandalised or defaced. Knocking it down would create an unsightly space unless a suitable landscaping scheme were introduced.
Could this building be put to productive use? Given the new spirit of partnership between the independent punters operating off La Mimosa and the city council, maybe it could be handed to them in the summer months as a storage or commercial space. If it is in proper use, it is less likely to be defaced.
It could also encourage the independent punters to establish greater supervision/maintenance of the tennis courts.
What do members think of this proposal. Or could it be used in a different way. Send comments to secretary_jga@hotmail.co.uk
Posted by JGA Secretary at Saturday, January 17, 2009