Minutes of meeting with Streetscene and council officers, 23.04.09 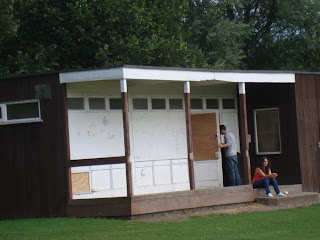 BOWLS PAVILIONS TO BE KNOCKED DOWN AT THE END OF THE SUMMER
This was the one of FIVE meetings attended by the JGA in just a few days, so many thanks to Richard Price, Anthony Bowen and Martin Thompson for giving up their time to make sure we are represented.

Matters for discussion on Thursday 23 April 2009

1. Damage by Circus and Beer Festival in 2008
(a) what is planned by way of reinstatement?
(b) why has this been so delayed? We note that it will not now be done until after this year’s Beer Festival.
N.B. JGA is aware that the Beer Festival is a very well organised event and that, unlike those involved in some other events, the organisers always own up to any damage done and offer to pay for it.

Answers: Major improvements for the Victoria Avenue entrance are planned including a tarmac ‘hammerhead’ with space for two articulated lorries to enter and reverse to a point where they can be unloaded onto small trailers, fork lift trucks etc. The idea is to make it unnecessary for large vehicles to go onto the grass. They will try to use the topsoil from this area to fill the ruts and dips caused by circus which will also be re-seeded. Timescale: could be done in next few weeks and at most by end of summer.
Costs and plans are being sort. Once these have been received they will be added to the list of priorities for Jesus Green (as discussed at the meeting on 20th April)

2. Trees. There is great public concern about the trees on Jesus Green and their care.
(a) when can we expect to see the promised tree assessment?
(b) what post HLF bid tree work is now planned - felling/replacement/new planting etc?

Answers: Diana Oviatt-Ham (Tree Officer) is preparing a paper on trees for next West/Central Area Committee meeting on Thursday 30 April for funding approval. This will include a modified planting schedule based on the Robert Myers report. ST promised to get a copy emailed to Martin Thompson.
Contacted Diana Oviatt-Ham to reminder her to email a copy to JGA
Robert & Diana’s report will be available shortly, some minor amendments currently being made.

There is a new protocol relating to tree work throughout the city. ST has been asked for a copy.
This is still in draft, again once complete it will be sent out.

3. Main path along Plane tree avenue. Urgent need for repairs.
(a) what news is there of discussions with County Council?
(b) are Streetscene committed to using small vehicles which stick to the path instead of swerving off it to
avoid pedestrians/cyclists?

Answers: A meeting with County Council has not yet happened but is booked. Streetscene were thanked for using smaller electric vehicles and promised to keep to the paths in future.


4. Swimming pool.
(a) when can we expect to see repairs to the fences completed?
(b) what else is planned to improve the appearance of the pool and its surroundings?

Answers: Fence repairs have been booked and are imminent. Interior of pool has been repainted and looks good. New gates have been ordered and will be fitted shortly. Pool due to open early in May. See Oviatt-Ham tree paper for more info about trees.


5. Skip by swimming pool hedge. It is an eyesore and has been there for far too long.
(a) When will it be removed?

Answer: Last year, Beer Festival people mistakenly put some of their rubbish in it contaminating contents but will be clearing it out after this year’s Festival. The skip will then be removed.


6. Children’s play area.
(a) when will damaged section of fence be replaced?
(b) Have repairs to the soft surface been ordered?
(c) Fill in dips where puddles form after rain?

Answer: Discussed at length. Damaged fence will be replaced. Some equipment is costing more to maintain than to replace. Much nearing end of useful life. Plans to renew the whole thing but where to put it? Parents like present position because of shade. This will be subject of consultation after the elections.


7. Skateboard park
(a) when will the promised repairs be done?

Answer: Useful discussion with users. Some repairs successful, others not so. Sensible suggestions made by skateboarders, listened to sympathetically by Ian Ross. This is now firmly on people’s radar. ST took name of James Walker (JamesWalker@gmail.com) who seems willing to come to meetings.

8. Signage on the Green. Consists of an awful mix of styles, many very scruffy.
(a) what plans are there to improve the signage?
(b) when can we expect this to be done?

9. Area around lock-keepers cottage. Looks as is some welcome tidying up has been done. Thank you!
(a) future plans for this area?

Answer: response to this Q will be in the minutes of last Monday’s inaugural meeting of the Jesus Green Working Group.
Lock Keepers cottage owned by Conservators of the River Cam.
The area around the bridge is one element of the overall view of Jesus Green that will be prioritised with all other features.

10. Rouse Pavilion. Badly in need of repairs to prevent further deterioration which will be even more costly
to repair.
(a) when can we expect this to be done?
Answer: Repairs to roof, gutters etc will be ordered. More info in minutes of Monday’s meeting (se 9 above)?
Quotes for repairs being sort.

11. Rubbish bins. Hopelessly inadequate. No wonder people leave their litter all over the Green. More and
much larger required.
(a) Why have we got to wait for the results of trials? Summer is almost upon us and once again we are still
without adequate bins!

Answers: Temporary bins have been ordered and their deployment is ‘imminent’. How long is ‘imminent’. Answer - next couple of weeks! But they are needed now.

Answers: Door will be boarded up with plywood. Demolition due at end of summer.


13. Tennis Courts
(a) when will the promised pressure washing be done?
(b) what plans are there for the grass courts?
(c) Jack’s queries

Answers: Pressure washing - query re access for equipment but I think it has been ordered (Street Scene). Hole in fence by gate to grass courts pointed out & repair requested. A roller has been ordered for Parkside Cricket pitch and they will try to find a way to get it over to the grass courts. There are Health & Safety issues if volunteers try to maintain courts. There once were signs on the courts but they have been removed. replacements requested.

The City Council’s Enforcement Team has been out and about e.g. pointing out to people that instant BBQs kill grass if not supported above it

There is a meeting on Friday 24 April at 10.30 in Hobson Room, St Andrew’s Street. Richard Price will attend.
Posted by JGA Secretary at Monday, April 27, 2009