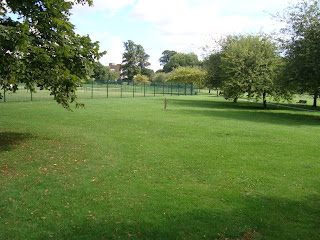 The JGA was delighted when the council threw out plans by EDF Energy to install a storage depot on the green near Park Street (see below)for at least 18 months.
But the work has to take place and there needs to be some viable storage alternative.
The JGA had suggested EDF Energy use the car park of the empty DWP building on Carlyle Road. EDF Energy seemed very keen on this site, but the DWP does not want to relinquish the building for this use, although the building has been empty for some time.
Other sites have now been identified on Madingley Road, but these are not exactly convenient and could be therefore unsuitable. If EDF cannot find a site, it could conceivably use emergency powers to gain control of an area of public land for its uses (not sure what legislation they would use but there must be something like this possible)
In the meantime, the council have prepared a report on ownership and public land issues relating to the green. This report is much welcomed as it helps to clarify some of the issues that relate to this application.
It was presented to the community services scrutiny meeting on June 25.

EDF Energy is seeking to use part of Jesus Green for a temporary site  compound for works required at Thompson’s Lane sub station. Jesus Green  is owned by the City Council, and is registered common land. For EDF to be  able lawfully to use Jesus Green for this purpose, it would need:

This report asks the Executive Councillor whether the Council should give its consent as landowner to this proposed use of Jesus Green.

The Executive Councillor is recommended to refuse permission for the use of part of Jesus Green by EDF Energy as a temporary site compound.

3.1 EDF Energy made a Planning Application (09/0087/FUL) on the 12th February 2009, through their agent MLM Consulting Engineers to use part of Jesus Green for a temporary site compound for works required at Thompson’s Lane sub station.

3.2 The application proposed a site compound to be in place for eighteen months, in connection with work to renew the electricity substation in Thompson’s Lane. The application proposed the area be surrounded by a 2.4m-high plywood hoarding, to be painted olive green. Within this would be space for storage of materials and plant, ten car or van parking spaces, and four demountable buildings in two stacks of two, to provide office space and

Report Page No: 2 toilets. At the south-west end of the site, a lay-by for delivery vehicles would be created alongside Park Parade, separated from the trees by a post-and- rail fence. The whole area would be surfaced with hardcore.

3.3 At the end of the period of work on the substation, the site area would be recovered with topsoil and seeded with grass, and the whole avenue of cherry trees to Jesus Lock felled and replaced with new flowering cherry trees.

3.6 The application was refused by the Development Control Manager acting under delegated powers on the 9th April 2009, and the letter of determination was sent the same day.  EDF have the right of appeal

3.8 Other sites considered before making the planning application include Jesus Green on the eastern side adjacent to Victoria Avenue, this was discounted due to disruption to traffic, the route taken from the site to Thompsons Lane, and for arboricultural reasons.

3.9 A vacant site at the top of Castle Hill, was discounted as it was too small.

3.10 Jesus Green is designated as Common under the City of Cambridge

without the approval of the Secretary of State, under the Commons Act

application under Section 38 to the Secretary of State.

3.11 The City Council owns Jesus Green and therefore has the same rights

as other landowners, subject to not interfering with public rights that attach to

common land. Therefore, the City Council’s consent would be needed for the

consent under the Commons Act. Subject to statutory powers (such as

compulsory purchase), the City Council is entitled to refuse or permit the

use, or access to, Jesus Green for purposes unconnected with its status as

3.12 The City Council has to decide as landowner whether it will or will not

3.13 The proposal to use Jesus Green as a temporary compound will have

significant impact on users and their enjoyment of the amenity.  There is no

3.14 The Friends of Jesus Green have discussed this proposal at an

3.15 Representations to the Planning application were received from:

• Save Our Green Spaces Cambridge

3.16 The representations can be summarised as follows:

• Harm to the character and appearance of the conservation area

• Loss of trees, including a memorial tree

• Difficulty of ensuring proper restoration of the Green afterwards

• Other sites could be used, such as Park Street car park

• Work should have been undertaken before 24 Thompson’s Lane

3.17 EDF and their Agent are currently considering the car park of Henry

3.18 This report is brought to Community Services Scrutiny Committee to

for a works compound for EDF work.

The following background papers were used in the preparation of this report:

• Correspondence with Friends of Jesus Green